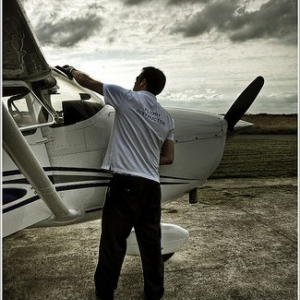 At that time, I was running CFI Academy (since 1998) with on an average of 10-12 Flight Instructor applicants per class. As there were not many CFI jobs at the time, and the airlines were still recovering from the aftermath of 9/11, I decided to offshoot and open a separate flight school for ab-initio flight training. It would benefit both the students wanting to receive flight training and the newly minted flight instructors that I was training myself.

American School of Aviation was born in April of 2002. I leased the building that became available after a flight school went out of business at Reid Hillview Airport, San Jose, CA. The kind of job we did there was amazing. It was so amazing that we soon outgrew the facilities there and had to relocate to a much bigger facility at Castle Airport, Atwater, CA.

Right after the move to Castle Airport, we landed a huge airline contract from a then major airline in India. The contract was so big that we could not accommodate any other business but the ab-initio training of their cadet pilots.

The year 2008 is known as the year of the Global Financial Crisis. Anyone who was an adult in 2008 could relate. The real estate market crashed. The fuel prices went up through the roof. And the airline industry was knocked down to its knees. And this was not limited just to the United States, but worldwide.

If you are not familiar with the Global Financial Crisis of 2008, a quick Google search is all that it would take to educate yourself. There are many documentaries, Hollywood movies, books, articles, etc.

American School of Aviation had all its eggs in one basket – catering to just one airline customer. When that airline folded, ASA was doomed to go with it. And it did.

As all the student enrollment at the time was from India, a couple of opportunistic Indian tabloids picked up the story. Tabloids are what they are, but Indian tabloids take things to another level. Sensationalism (we see this in current US mainstream media now as well) “news” is what makes these tabloids sell.

All I can say is that most of what they published was factually lies and twisted gossip. All was done with one simple objective – sell the damn tabloid.

And unfortunately, even today, 12 years later, if someone has anything negative to say about me, this is ALL they got!

12 years of some people trying to hurt me and my business using ASA’s business failure. And 12 years of me showing what I am, with my actions.

Want to earn more as a pilot and get highly coveted jobs? Sign up for our exclusive email only course where you get weekly insights about how to accelerate your aviation career.